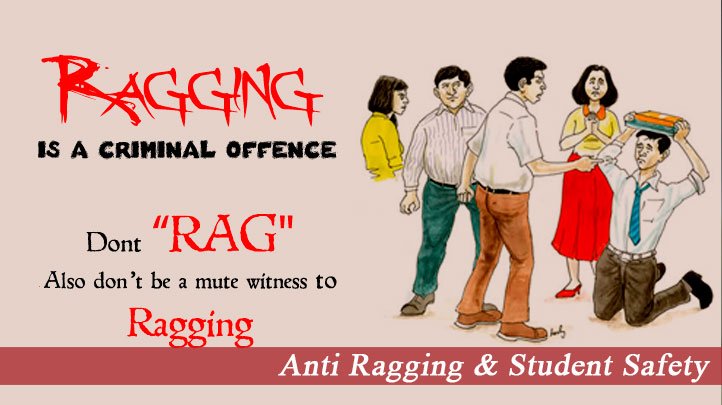 Maharashtra Prohibition of Ragging Act 1999 which is in effect from 15th May 1999 has the following provisions for Action against Ragging.

In view of the directions of the Honorable Supreme Court in SLP No. 24295 of 2006 dated 16-05-2007 and in Civil Appeal number 887 of 2009, dated 08-05-2009 to prohibit, prevent and eliminate the scourge of ragging including any conduct by any student or students whether by words spoken or written or by an act which has the effect of teasing, treating or handling with rudeness a fresher or any other student, or indulging in rowdy or undisciplined activities by any student or students which causes or is likely to cause annoyance, hardship or psychological harm or to raise fear or apprehension thereof in any fresher or any other student or asking any student to do any act which such student will not in the ordinary course do and which has the effect of causing or generating a sense of shame, or torment or embarrassment so as to adversely affect the physique or psyche of such fresher or any other student, with or without an intent to derive a sadistic pleasure or showing off power, authority or superiority by a student over any fresher or any other student, in all higher education institutions in the country, and thereby, to provide for the healthy development, physically and psychologically, of all students,

Ragging constitutes one or more of any of the following acts:

Ragging constitutes one or more of any of the following acts:

The punishment to be meted out to the persons indulged in ragging has to be exemplary and justifiably harsh to act as a deterrent against recurrence of such incidents.

Every single incident of ragging a First Information Report (FIR) must be filed without exception by the institutional authorities with the local police authorities.

Depending upon the nature and gravity of the offence as established the possible punishments for those found guilty of ragging at the institution level shall be any one or any combination of the following,

Following members are hereby informed that as per AICTE Rules & Regulation the Anti-Ragging committee has been formed. We are glad to inform you that you have been nominated as a member of Anti Ragging Committee.